Skip to content
Abu Dhabi Education Council concludes ‘Champions of Tomorrow 2015’ with the participation of 84,244 students 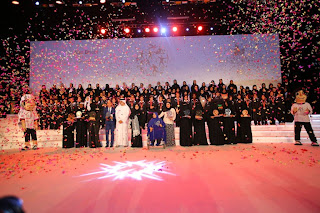 ·       Initiative held under the patronage of H.H. Sheikh Nahyan Bin Mubarak Al Nahyan
·       18 schools honored with ‘Shield of Excellence 2015,’ while six were declared Sports Day 2015 winners
·       180 students and 72 teachers from 18 schools & 24 principals received ‘Excellence Shield 2015’ award
·       24 physical education teachers from six schools recognized for nurturing students’ athletic skills as part of preparation for Sports Day 2015
Abu Dhabi, May 18, 2015 – The Abu Dhabi Education Council (ADEC) concluded the ‘Champions of Tomorrow 2015’ initiative today, (May 18th 2015), which involved a series of sports competitions for top student athletes across Abu Dhabi, Al Ain and the Western Region.
A special awarding ceremony was held at the Paris-Sorbonne University Abu Dhabi to honor the winners as well as the participating schools and teachers. The much-praised competitions displayed the skills and strong performance of 84,244 students from across the UAE.
Her Excellency Dr. Amal Al Qubaisi, Director General at ADEC, said: “We thank all those who contributed to ensure the success of this year’s campaign, from ADEC members to students, parents, faculty members and all administrative staff of participating schools. We also extend our appreciation to the Abu Dhabi Sports Council whose support greatly helped us achieve the goals of the initiative. The ‘Champions of Tomorrow’ represents the visions of H.H. Sheikh Khalifa and H.H. Sheikh Mohammed bin Zayed Al Nahyan, who is also the Chairman of ADEC, in terms of human capacity development to build a generation capable of securing Abu Dhabi’s global leadership and making the capital city an influential force in the world stage.”
“The positive results of ‘Champions of Tomorrow’ boost our aspirations to discover new young talents who will join our national teams in raising the Emirates flag in international sporting events. The campaign successfully reached more than 50 per cent of public school students in Abu Dhabi, Al Ain and the Western Region. We are planning to include private schools in our future editions as we continue our efforts to discover more promising athletes, teach them the Olympic principles, and prepare them for international competitions. These form part of ADEC’s vision of developing the education system to produce a generation that can compete globally,” said Dr. Al Qubaisi.
H.E. Aref Hamad Al Awani, Secretary General, Abu Dhabi Sports Council, said: “The ADEC-organized ‘Champions of Tomorrow’ initiative was held in strategic partnership with Abu Dhabi Sports Council. Staging the competitions reflects our support for the Abu Dhabi Government’s efforts to implement programs that encourage physical activities, contribute to the development of sports programs within academic institutions and support the sports sector through training of the country’s future professional athletes.”
“The Abu Dhabi Sports Council is keen on developing scientific programs to discover new recruits and prepare and revitalize the entire sports industry by coordinating with concerned education entities. Additionally, we support programs and sports competitions that serve the aspirations of all segments of society such as the ‘Champions of Tomorrow’ initiative, which plays an important role in developing sports at the school level in Abu Dhabi. ‘Champions of Tomorrow’ also prepares and trains the young generation in accordance with our sports agenda,” Mr. Al Awani added.
‘Champions of Tomorrow 2015’ promoted sports awareness among students, activated the role of schools in nurturing the skills of young athletes, and provided an ideal platform to achieve excellence at local, regional and international levels. Among its most notable activities were Sports Day, which attracted 140,000 participants from across the UAE; the Abu Dhabi Education Council Marathon, which witnessed the participation of 3,000 students at Yas Marina Circuit; and the Beach Festival 2015, which brought together 140 high school students. The campaign’s sports competitions were held in three categories, namely the ‘Mandatory Games’ (football, athletics), the ‘Individual Games’ (swimming, gymnastics, fencing, judo), and the ‘Complementary Games (handball, basketball and volleyball).

Abu Dhabi School of Management to conduct Balanced Scorecard Institute Certification Training
Programme tailored for government entities for the first time
UAE, May 10, 2015 –The Abu Dhabi School of Management (ADSM), an educational institution dedicated to developing the UAE’s future entrepreneurial leaders, has announced that it will be conducting Balance Scorecard for Government Professional Certification BootCamp in collaboration with the Balanced Scorecard Institute (BSI). This marks the first time that the BSI certification is being tailored for government entities.
The first government version of the five-day Balanced Scorecard Certified Practitioner BootCamp will run from June 7 to 11, 2015 at the ADSM campus and will be delivered by the BSI Co-Founder and CEO Howard Rohm. Howard Rohm is a former U.S. government executive and the original developer of the Institute’s balanced scorecard framework, used worldwide by governments, industry and nonprofit organizations.
BSI will provide the training and certification materials for the course, which is based on the Institute’s proprietary framework for developing balanced scorecard systems, called the Nine Steps to SuccessTM. Those who complete the course and pass the certification examination will be certified jointly by BSI and the George Washington University College of Professional Studies at the level of Certified Balanced Scorecard Practitioner.
Sophia Korayim, Director of the Center of Innovation and Entrepreneurship, Abu Dhabi School of Management, said: “The Balance Scorecard is an empowering tool that enables organizations to determine if they are getting the results they expect and need from their team. The courses we will co-deliver with BSI will enable the leadership of local government entities to ensure that deliverables are met according to international standards and in line with the strategies of their respective organizations.  This is the first time that a Balanced Scorecard certification training of this level is being offered for government entities so we expect the programme to have a considerable impact on the quality of governance across the emirate.”
The Balanced Scorecard is a strategy performance management tool that everyone in the organization can use to align strategy to mission and vision, align employees and the work they do to the strategy, and focus on improved program and service efficiency, effectiveness and delivery to citizens. Managers use to monitor how staff under their supervision perform their duties and the outcomes of their actions. It is used by businesses, governments and nonprofit organizations to align business activities to the vision and strategy of the organization, enhance internal and external communications, and benchmark organizational performance against strategic goals.
BSI is the original certifying body for balanced scorecard practitioners. Its award-winning framework, Nine Steps to SuccessTM, is a disciplined and practical approach to developing a strategic planning and management system based on the Balanced Scorecard. The Institute’s Certified Balanced Scorecard Practitioner programme is recognized worldwide, with around 2,000 practitioners from over 70 countries granted this level of proficiency so far since the program was launched in 2007.
“Around the world, our certification training continues to make a difference in the ability of organizations to improve their performance, align the work of their people with their strategies and vision, and gain valuable operational insights through well-designed metrics. By combining our 18 years of experience with government and other mission-driven organizations we have been able to customize a program unique to the culture and goals of government. Through our partnership with ADSM we aim to help Abu Dhabi’s government entities and employees achieve these results and incorporate the Balanced Scorecard as an essential part of their management,” added Howard Rohm.
-ends-