Skip to content
UAE, August 27, 2013 –The Emirates Institution for Advanced Science and Technology (EIAST) recently held an awards ceremony to honour the participants of the Dubai Sat 2 logo making contest. Seventeen-year-old Aliaa Ahmed Sayed from Al Khaleej National School emerged as the overall winner for her use of the image of a falcon and the colors of the UAE flag to reflect the culture and history of the UAE. EIAST will place the logo on the satellite, which is scheduled for launch in the fourth quarter of this year. 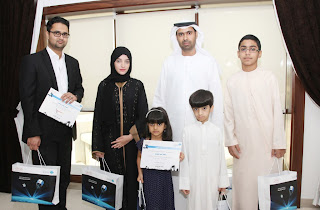 The ceremony was attended by EIAST Director General H.E. Yousuf Al Shaibani, EIAST engineers and employees, and relatives of the winners. Al Shaibani emphasized the Institution’s full commitment to developing the abilities of students and youths in general and providing them with all the support to develop and harness their talents.
“The participation of students in such competitions promotes capacity building and develops the spirit of innovation. Contests also foster a spirit of competition that results in solutions and innovations that can be of great help to the community. They represent an opportunity to introduce students to technical and scientific achievements in their own country that can become a source of pride for them,” said H.E. Al Shaibani.
Alia Ahmed El-Sayed, the winner of the competition said: “I found out about the contest through an advertisement placed in our school. I told my mother I wanted to join since I like drawing logos, and she encouraged me to do so. I wanted to design a logo that best reflects the spirit of the UAE. I have drawn a number of logos but only one of them has won. I am very proud and happy that my logo will be placed on the satellite and fly into space.”
The contest was opened in January 2013 to students in schools and universities in the UAE. It was organized in coordination with the Ministry of Education, education districts, public schools and universities. The competition was divided into five age groups: 5-9 years, 10-14 years, 15-20 years, 20-24 years, and 24 years and above.
Dubai Sat 2 is a joint project between EIAST and the Satrec Initiative of South Korea. The satellite will provide high-quality images for governmental departments working in the field of infrastructure, such as Dubai Municipality and RTA, as well as local, regional and international bodies. It will also support the research projects of universities and academic entities.
EIAST was established by the Dubai Government in 2006 with the goal to promote a culture of advanced scientific research and technology innovation in Dubai and the UAE, and to enhance UAE nationals’ capacity in technological innovation and attaining leading scientific levels. It is mainly involved in outer space research and development; manufacture of satellites and development of systems; space imaging; and ground station services and support to other satellites.