Skip to content
In collaboration with the Office of H.H. the Crown Prince of Dubai and in line with University’s efforts to enrich knowledge & promote culture of creativity
The book documents experiences of 60 innovative Emiratis to inspire future generations and highlights citizens’ role in driving UAE’s cultural, intellectual and humanitarian development
[UAE, December 8, 2014] – Hamdan Bin Mohammed Smart University (HBMSU) has launched the digital edition of the book, ‘Those Who Inspire: UAE,’ authored and published by French nationals Delphine Barets and Marlene Plomik. HBMSU’s learners and staff will be able to access the digital edition at the university’s e-library and Virtual Executive Club. The venture is part of a joint initiative between the book’s authors and the Office of H.H. Sheikh Hamdan Bin Mohammed Bin Rashid Al Maktoum, Crown Prince of Dubai and Chairman of Dubai Executive Council and President of HBMSU. The two parties aim to pass on knowledge about Emirati culture to the local community and inspire the younger generation to pursue excellence, leadership and creativity in a bid to position the UAE among the world’s developed countries. 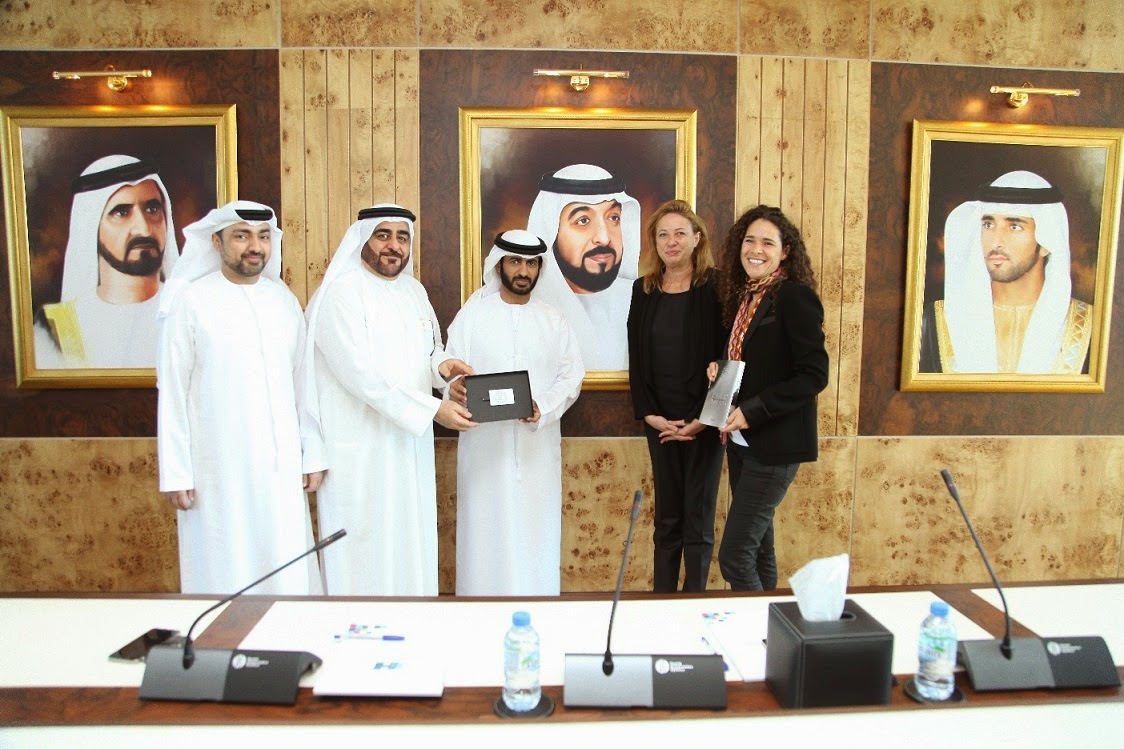 Attending the launching of the book’s digital version were H.E. Saif Bin Markhan Al Ketbi, Director General of the Office of H.H. the Crown Prince of Dubai, Dr. Mansoor Al Awar, HBMSU Chancellor and Chairman of the Governing Board of the UNESCO Institute for Information Technologies in Education (IITE), Dr. Khalid Mohammed Al
Zahed, CEO of Strategy and Development Sector of the Office of H.H. the Crown Prince, and authors Barets and Plomik.
The newly launched book, which celebrates the successful accomplishments of 60 successful Emiratis, was received positively in the UAE. It acts as an inspiration for excellence and leadership in the administrative, economic, artistic, medical, sports, charitable, humanitarian, and various other segments.
Dr. Al Awar thanked the Dubai Crown Prince’s Office for entrusting the digital edition to HBMSU. He lauded the book for portraying some of the most inspiring experiences of select Emiratis. He also commended the book for reflecting the high level of excellence and creativity that the Emirati community has achieved, saying it contributes to the country’s cultural, intellectual and humanitarian development.
Dr. Al Awar said: “We are honored to launch the digital edition of the book which will be accessible through the HBMSU portal as part of our ongoing commitment to enrich knowledge and consolidate the culture of innovation in the Arab World. We look forward to passing on the culture of creativity as a key pillar of the ambitious objectives of the National Innovation Strategy launched by H.H. Sheikh Mohammed Bin Rashid Al Maktoum, Vice President and Prime Minister of the UAE and Ruler of Dubai. The strategy aims to make the UAE one of the world’s most innovative countries in the next seven years. For our part, we are intensifying our efforts to contribute effectively to the strategy by encouraging innovation in the education industry and providing the skills of the 21st century to build a young generation capable of consolidating the UAE’s position as an international model of creativity, excellence and growth.”
Al Awar concluded: “The book sheds light on the creations of our Emirati intellectuals, doctors, artists, educators, scientists, athletes and entrepreneurs. It highlights that success, creativity and excellence are not limited to a certain domain but are open to everyone with different interests. We are confident that the book, with all the leading experiences
and achievements it documents, will inspire readers to pursue leadership and excellence in their field of expertise. This will make a positive impact on our society.”
‘Those Who Inspire: UAE’ was officially launched in the UAE on October  29, 2014 under the patronage of H.E. Sheikh Nahyan Bin Mubarak Al Nahyan, Minister of Culture, Youth and Community Development. The 284-page book is the second of a series included in the ‘Those Who Inspire’ collection. The first was the Oman-based edition launched in 2012. The authors are planning to launch the book in Bahrain, Greece, France, Nigeria, and Hong Kong, among other places. Barets and Plomik gave 1,000 complimentary copies to the Ministry of Higher Education and Scientific Research for distribution among universities and colleges across the UAE in the hopes of encouraging, inspiring and motivating students to achieve academic, professional and personal success.