Skip to content
DubaiSat-2 successfully passes JAXA’s Propulsion System Test
UAE, January 29, 2014 – DubaiSat-2 has successfully passed the tests conducted by the Japan Aerospace Exploration Agency (JAXA) in collaboration with the Emirates Institution for Advanced Science and Technology (EIAST), on the satellite’s Propulsion System, in addition to the other examinations ordered to ensure its safety and readiness. The visiting JAXA delegation of high-profile experts and professionals was received by a group of EIAST’s top engineers who gave a detailed presentation on DubaiSat-2 activity and successful results since its launch on November 21, 2013.
The propulsion system is designed to support and align the satellite position in orbit, allowing the control of satellite altitude above ground level and modifying it automatically in the event of any deviation through a set of predetermined and saved commands sent from the control station. 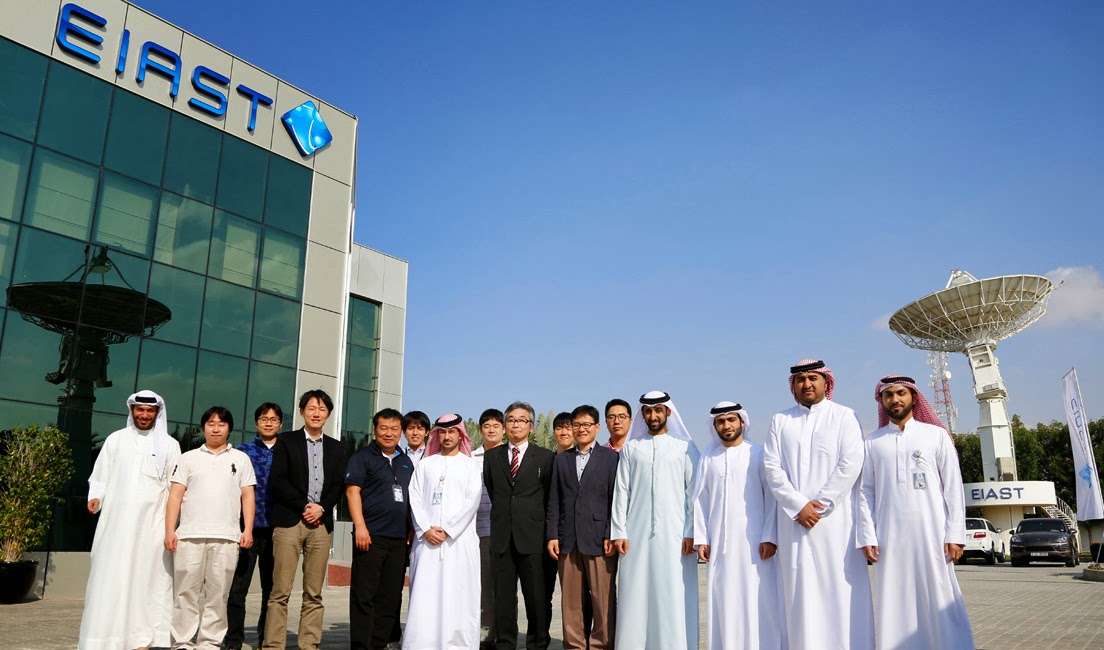 Mohammed Al Harmi, Director of Ground Services Department, EIAST, said: “The tests were conducted to ensure the satellite’s technical readiness and safety of equipments, including all technical features and technologies. The postive assessments reflect the high qualifications and efforts of EIAST’s team of engineers to launch and activate DubaiSat-2, which represents a key milestone of the UAE’s excellence and leadership in the regional as well as international space industry.”
“We are delighted to have collaborated with JAXA and appreciate their efforts to verify safety and proper functioning of all DubaiSat-2 systems, including the propulsion system. The visit offered a great opportunity for our engineers to exchange expertise and learn about the latest technologies and features in the space industry,” Al Harmi added.
DubaiSat-2 is equipped with an electro-optical camera to provide higher resolution space imagery from all over the world throughout its lifetime to be used for various applications including environmental projects, urban planning, infrastructure and and provide specialized reports. The satellite can also take multiple images of the same area, as well as receive and process them from anywhere in the world within one day. It completes one full orbit around the earth in 96 minutes with 60 per cent of its time facing the sunlight.
EIAST was established by the Dubai Government in 2006 with the goal of promoting a culture of advanced scientific research and technology innovation in Dubai and the UAE, and enhancing technology innovation and scientific skills among UAE Nationals. It is mainly involved in outer space research and development; satellite manufacturing and systems development; space imaging; and ground station services and support for other satellites.